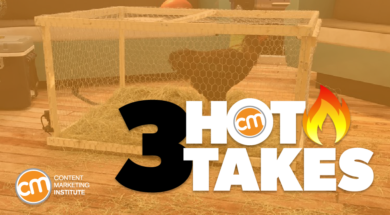 This week, media brands serve up hot takeaways for B2B and B2C content marketers. First up, ESPN crows about a rooster. Next, a cross-platform food show in Australia expands to include brand partnerships. And a travel magazine launched months before the pandemic marks its relaunch with a new web series.

On Saturday, a rooster named Driveway made a national TV appearance on ESPN’s Marty and McGee show. The SEC Central duo was on site at the University of South Carolina, home of the Gamecocks, for the football game against the University of Kentucky Wildcats.

Driveway’s television appearance was only the start. Marty and McGee also featured a live feed of the rooster on their Instagram account. The hosts were so fascinated watching the rooster that they interrupted their conversations several times to talk about it. We can only imagine how many who watched on Instagram felt the same. Instagram Live videos last only 24 hours, but we found this shot from Marty and McGee’s account for your enjoyment.

WHY IT’S HOT: Marty and McGee producers saw a unique niche content opportunity. While Driveway was one of many guests on the cable show, he was the only star on the Instagram channel. Content marketers often face a similar challenge: When you have an interesting story within a story, think about how you can spin it off to create a standalone version. It might fit into the same format as the original, or it might work better on another platform or in a different format.

Think about how you can spin off stories within a story as standalone #content in another format or platform – like the live rooster cam from @ESPN hosts @MartySmithESPN and @ESPNMcGee via @CMIContent. Click To Tweet

Australia-based media network Nine is extending its well-known Good Food content across platforms, according to Media Week. Good Food is a big brand in Australia with over 500,000 followers on Facebook and Instagram combined.

Up first in the content expansion is Good Food Kitchen, an eight-part TV series featuring host Adam Liaw and renowned chef Danielle Alvarez. The show, launching Oct. 9, isn’t limited to television. It also will have its own hub on the redesigned Good Food website for videos and recipes.

Create for your audience’s values like Gray Jones Media

Vacationer – an online travel magazine for the LGBTQ+ community – is relaunching.

Vacationer made its original debut in 2019 – and then faced challenges as travel restrictions over affected its readership. So Gray Jones Media, which publishes the property, paused the publication during the pandemic and used the time to rethink its approach.

Now it’s about to return with new online content launching next week, including a new web series called Check Your Luggage.

As the publishers told MediaPost, the publication’s goal is to focus on the entire LGBTQ+ community.

“I’ve subscribed to travel magazines and clicked through travel websites, and I’ve not felt seen as a Black gay man,” Kwin Mosby, editor-in-chief, told MediaPost. He also said the digital magazine “will shift the narrative, showcase our community’s diversity, and create a safe space for us to share our travel experiences and inspiration regardless of how we identify ourselves.”

The six-part web series Check Your Luggage will focus on a different area in New York City in each episode.

WHY IT’S HOT: Two things about Vacationer’s new plan are worth noting. Instead of carrying on while vacationing dried up, the company paused its content. Then it smartly used the downtime to update its vision for the magazine, expanding into a new medium – a video series –  for a new way to engage its audience.

@VacationerMag paused publication during the pandemic and used the time to rethink its approach. Now it’s back with new #content and a #video series via @CMIContent. Click To Tweet

HANDPICKED RELATED CONTENT: The 3 Strategic Pillars Behind Every Winning Content Strategy
Intrigued, puzzled, or surprised by an example, news, or something else hot in content marketing? Share it with us by completing this form. Your submission may be featured in an upcoming Hot Take.

How to Know When Google Changes Yours

No comments to show.

Get all latest content delivered to your email a few times a month.